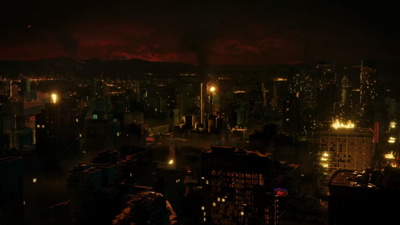 Source Down there, they twist a man's soul until he's no longer human.John Constantine Hell, also known as the Underworld[1] and Sheol,[2] is an inter-dimensional plane of existence where demons, fallen angels, and the souls of damned humans reside. The souls that died are sent there to be...

Legend of Tomorrow has confirmed the existence of The Fates and Hell. Those are beliefs of two very different religions. Which religion are they confirming to be true?

Or was Jim Corrigan the first Spectre in the Multiverse?

This is a continuation of this post. So if you haven’t read it, go do so before reading this one.

One commenter on this post asked why there’s no Nth metal artifacts from Legends season 4. At the time, I said I couldn’t really think of anything. But I just got an idea.

Instead of something specific from that season, the Nth metal artifact is a large collection of the stuff locked in a vault in Hell. A the vault is hidden away in a secure part of Hell whose location is known by only one man, Lucifer Morningstar. So, one of the plots can involve Constantine and Astra going on a Sojourn through Hell to find Lucifer’s Nth metal cache. And as for allies they can recruit on the way, Astra still has Vandal Savage’s soul coin, so he might be useful. Or maybe Lucifer can send Mazikeen down with them as a guide.

When Legends created the anachronisms and freed Mallus, they also freed Charlie, right? So were her sisters (The Fates) also in hell?

Or is it just a post-crisis thing? and Charlie wasn't a fate in Earth-1?

I saw on some pages that Satan was deceased but God is alive on his page and so is Jesus. So how does this work????