Arrowverse Wiki
Register
Don't have an account?
Sign In
Advertisement
in: Episodes, The Flash (The CW) episodes, Season 1 (The Flash), Crossovers
English

All Star Team Up

"I thought that Wells was a great man and I was so wrong."
—Barry Allen explaining his situation to Felicity Smoak

"All Star Team Up"

"Who is Harrison Wells?"

Eddie and Joe seeking after burglars in their squad car. Joe calls the Flash, who closes their vehicle pursue a long ways in front of calendar. As Joe and Eddie keep halting wrongdoing while on the lookout, the Flash continues helping them in a progression of happy minutes.

Across town, things aren't so nervy for a lady named Lindsay, who enters her vehicle around evening time. At the point when she gets in the vehicle, a bee hive get through the vents and sting her to death. When Joe and Barry examine the passing scene the following morning, Joe asks Barry to run some crime scene investigation at STAR Labs. They at that point talk about Harrison Wells, and Joe questions if Cisco and Caitlin are in cahoots with the Reverse Flash. Barry doesn't accept what Joe says, however Joe cautions Barry from telling Cisco and Caitlin what he thinks about Wells.

At STAR Labs, the group goes over potential reasons for Lindsay's demise. In any case, at that point, Felicity Smoak shows up from Starling City with an unexpected visit. She asks Cisco, Caitlin, Harrison, and Barry to come outside. Outside, Ray Palmer flies down in his Atom suit. Felicity discloses to Barry that Ray is her beau, which prompts a little envy.

Inside the lab, Cisco and Felicity adjust Ray's suit, and Ray announces his superhuman way of life as the Atom. Harrison offers to assist Ray with improving his suit, yet Barry feels hesitant. Detecting his reluctance, Felicity requests that he talk things over with Barry at Jitters Coffee.

Across town, Iris visits Eddie at his office. Detecting Eddie's ongoing separation, Iris asks him what he his escaping her. In any case, Eddie doesn't uncover that he knows Barry and Flash are the same person . Eddie reveals to Joe that he needs to give Iris access on their Flash mystery, yet Joe instructs him not to. At Jitters, Barry is going to inform Felicity concerning Reverse Flash, yet Eddie bursts in. He asks Felicity what he ought to do about Iris and his' harsh fix, and Felicity proposes a twofold date with herself, Eddie, Iris, Barry, Ray.

At STAR Labs, Ray says something that triggers a memory in Cisco, making him recall his experience with the Reverse Flash that was apparently cleaned from the time stream. Be that as it may, the flashback is stopped when Caitlin gets a report of another honey bee assault. The Flash races to the amassed fabricating, yet is overwhelmed by many honey bees, who can frame shapes. They rapidly quell The Flash, and convey his body outside the structure, where Joe discovers him. Barry enters a coronary failure, yet Wells can spare the Flash by enacting a remote defibrillator in his suit.

Spared, Barry and Joe come back to STAR Labs. Cisco assumes fault for misleading the Flash and permitting him to get stung, which causes Barry to contemplate Joe's prior words about Cisco. The pack must leave for their twofold date be that as it may, leaving the remainder of the group in STAR Labs with one of the Africanized honey bees.

At the twofold date in addition to one supper, in a café that Ray choose to simply purchase (as very rich people do) Iris and Eddie inactive forcefully contend over their trust issues. Yet, Barry can't concentrate on anything, feeling sick, and reasons himself. Felicity tails him. Barry then discloses to her that he realizes Harrison is the Reverse Flash. He shares his hypothesis that Caitlin and Cisco may be helping Reverse Flash. At the point when they come back to the supper table, Eddie and Iris continue battling. Eddie will not impart his mystery to Iris, and Iris leaves supper early, saying that she'll remain with Joe.

Felicity gets a crisis call from STAR Labs, where Cisco, Harrison, and Caitlin escape from the Africanized honey bee. Flash races over and catches the honey bee before it can sting anybody. When it's caught, they understand that the honey bee is really a robot. What's more, normally, the robot honey bee accompanies a camera. As it records the posse watching, the Bug-Eyed outlaw watches them from her based.

The group cross-references the honey bee's casualties, where they find that they all worked at Mercury Labs. Harrison goes to see Dr. Tina McGee at Mercury Labs and gets some information about the two casualties and mechanical honey bees. Tina makes sense of that killer must be Brie Larvan, an old Mercury representative who imagined the honey bees before Tina terminated her for abusing them. Joe then says that Tina will be her next objective, and requests that her be protected. Tina rejects the offer.

Back at the eatery, Felicity advises Barry to confide in Cisco and Caitlin, in spite of his aversion. Barry appears to accept her recommendation. Barry gets back to discover Iris. She asks Barry what Eddie could be avoiding her. Barry says that Eddie is most likely simply managing a monstrous case, and would prefer not talk about his dull work.

Inside STAR Labs, the hostage Africanized honey bee is reactivated by Brie. Yet, by perusing the honey bee's inward mandate, Harrison discovers that Brie's bee hive are making a beeline for Mercury Labs to murder Tina. Beam and Cisco name Brie the Bug-Eyed Bandit. Beam offers to spare Tina, since his defensive layer will shield him from the honey bee's stings. Barry will seek after the Bug Eyed Bandit at her remote area.

Brie is going to kill Tina with her remote honey bees, yet the Atom shows up and draws the honey bees away. Beam loses the honey bees and crash lands into a van Cisco is driving. At the point when The Flash goes up against Brie, she gathers another bee hive. Flash runs from the multitude, yet they seek after him stubbornly. Fortunately, Felicity captures the honey bees' radio recurrence with her great hacking abilities, and closes them down.

Be that as it may, it's not finished at this point. One of the honey bees, despite everything connected to the Atoms' suit, stings Cisco. Cisco goes into stun, however The Flash races over. He restarts Cisco's heart utilizing the super-vibrations of his hands. The following day, Tina McGee visits Barry to apologize for not taking the CCPD's security. Barry utilizes the chance to inquire as to why her and Harrison's relationship soured. She clarifies how after Harrison's adoration kicked the bucket, he "turned into an alternate individual" (not realizing that Eobard Thawne had his spot). Joe enters, and says that he now thinks Cisco is blameless.

Barry bids farewell to Felicity and Ray, who head back to Starling City. Iris visits Eddie at his office once more, and says that Barry has vouched for Eddie's ongoing separation. Yet, Iris gives the final offer that if Eddie doesn't mention to her what's happening, she will say a final farewell to him. She leaves Eddie to let him consider his choice before making it.

At STAR Labs, Cisco and Caitlin meet Barry and Joe at Barry's office. Barry has something to let them know. He gives them access on his mystery examination, and says that Reverse Flash and Harrison Wells are a similar man. Caitlin isn't persuaded, yet Cisco says that he's accomplished "dreams" where Harrison Wells is the Reverse Flash, and slaughters him. That appears to have altered her perspective. With the whole posse ready, the last examination concerning the Reverse Flash starts. 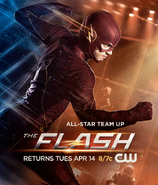