Arrowverse Wiki
Register
Don't have an account?
Sign In
Advertisement
in: Objects, Suits, Article stubs, Allusions to the comics
English

"Now I've been wondering, how do you decide between the red hoodie and the one with the mask?"
—Thea Queen to Roy Harper[src]

A protective suit was worn by Roy Harper as the vigilante Arsenal, and was later repurposed by Thea Queen as Speedy, until she retired from vigilantism. The initial suit was designed and created by Lodai.

The suit originally just consisted of Roy's favorite red hoodie and a mask, a quiver, a bow and arrows. But sometime after Slade Wilson was defeated and imprisoned on Lian Yu by Oliver Queen, John Diggle visited Lodai and requested he make another vigilante suit, similar to Oliver's, with a number of differences for Roy Harper. It is unknown what materials it is made from; with the exception of kevlar, it also seems to resemble the suits worn by his mentors, Oliver as the Arrow, and Sara Lance as the Canary.

After the suit was confiscated by the Starling City Police Department, Malcolm Merlyn managed to retrieve it. It was then given to Thea Queen to give to Roy, though Roy decided to give the suit to Thea before leaving once again.[1]

Thea modified and donned the suit to stop the League of Assassins from releasing a lethal toxin. Afterwards, Oliver christened her as Starling City's newest protector and named her Speedy.

After returning to Star City to stop the Ninth Circle, Roy took back the mantle of Arsenal and with it the suit.

John Diggle requested that Lodai make a vigilante suit for Roy Harper, that is similar to Oliver's; but with a number of differences.

At some point in an erased future, Roy had self-exiled himself to Lian Yu; to atone for his uncontrolled killing of two men during a bloodlust episode. He had donned a new Arsenal suit in this time.

"This—this is the bomb! And I mean red is so much cooler than green, am I right?"
—Cisco Ramon to Roy Harper[src] 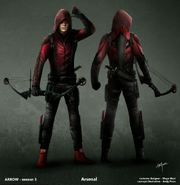 The Arsenal suit on display.