Beebo is a fictional character and part of the "Cuddle Me Beebo" toy brand. A toy of Beebo from 1992, carried by young Martin Stein, became an anachronism, creating a time aberration of New Valhalla, due to Beebo becoming the Blue God worshiped by Vikings, who started an early conquest of North America. More Beebos were seen recently in a toy factory in 2018 but were destroyed thanks to The Trickster. Beebo was thought of by Nate Heywood as a manifestation of "something pure", which led to him becoming an avatar of the power of Totems of Zambesi, wielded by Legends, in the final battle against Mallus.

The "Cuddle Me Beebo" toy craze took over Central City and other American cities by 1992. A Beebo toy was sought out by Martin Stein, who was searching for a Hanukkah present for his daughter, Lily Stein. Using his knowledge of physics and archery skills, Martin managed to get the last toy in the Toys Are We store and escaped a crowd of unhappy customers. Caught up with an anachronism, Stein was sent to Vinland, 1000 A.D., where he was chased by a rabble of angry Vikings.[1]

The Vikings captured Stein and held him prisoner for a week while worshiping the toy as a God of War, fascinated by its appearance and ability to talk when it was cuddled, or its tummy caressed. At first, the Vikings thought that only Martin could make Beebo talk, but it soon became clear that his translations were not what Freydís Eriksdottir, the sister of the Viking leader Leif Eriksson wanted to hear. Freydís usurped Stein's position as "Beebo's priest" and twisted Beebo's words for her own agenda. Interpreting the toy's simple words of "Beebo hungry", "Beebo thirsty", and "Beebo loves you" as divine messages, the Viking leaders came to a religious impasse. Leif wanted the Vikings to go back to Greenland, swayed by the words of Christian monks. Meanwhile, Freydís considered Beebo's messages to be a sign that Vikings should conquer the rest of the Americas.

Freydís' victory would result in the aberration timeline of New Valhalla, with a Norse-controlled country in place of the United States. The aberration was swiftly settling in due to Beebo's appearance being a Level 12 anachronism, with Ava Sharpe ending up celebrating Beebo Day instead of Christmas. The Legends arrived at Leif's Yuletide celebration feast to stop the anachronism, posing as fellow warriors to the Vikings. When Mick Rory tried to steal Beebo from the Vikings, he was distracted by the alcohol offered to the little Blue God and was caught by the Vikings. When they tried to sacrifice him to "feed" Beebo, the pyre was swiftly put down by Citizen Cold. Dumbfounded at the miracle, the Vikings were momentarily swayed by Ava to think that Beebo spared Rory, but were angered when they saw Amaya Jiwe trying to escape with the puppet in hand. The Vikings jumped into battle with the Legends, trying to get Beebo back. Angered by all this tomfoolery, Mick incinerated the Beebo toy with his Heat Gun, restating his hatred of puppets. With the toy's last words being about it wanting cuddles, Leif convinced Freydís that Beebo was a false god with false promises.

The Legends expected the fall of Beebo to be the end of the anachronism, but Ava reported that "Odin Day" was saved instead of Christmas. Everybody was dumbfounded until they witnessed Damien Darhk and Nora Darhk arriving, posing as Odin and a Valkyrie, demanding worship and conquest by using a spear that projected lightning to prove their power. Now with the Darhks as the main threat to the timeline once again, the Legends formulated a plan that would allow to restore the worship of Jesus Christ to the Vikings. For that, they used another Beebo toy, which was flown and voiced by The Atom, hidden in his minimized form inside the toy and speaking through a voice modulator. With Leif now astonished at Beebo rising from the grave like Jesus, the Atom used this moment to encourage the Vikings to believe in Jesus Christ, as well as science, evolution, and climate change. Nora took up a bow and arrow and attempted to strike Beebo down, but missed as Beebo flew away. Before she could resume her assault on the Blue God, Mick and Cold took Nora down.

The Legends' actions prevented the New Valhalla aberration, restoring order to the timeline. With the team now successful and Martin returned to 1992, Jefferson Jackson decided to visit him to say one last goodbye. Upon arriving at the Stein house, Jackson gifted Beebo to a young Lily Stein.[1]

Overtaken by Prank and the TricksterEdit

In 2018, Axel Walker, the second Trickster, and his mother/sidekick, Zoe Clark/Prank used Beebo as a test subject to show off the effects of the powerful acid that Axel had concocted and dubbed "Axid" in a live broadcast from their toy factory to Central City. Beebo managing to state his acquisition of getting an "owie" before he was obliterated. Later, when Vibe and Killer Frost went to rescue hostages from the toy factory, three flying Beebos suddenly appeared in their way but were frozen solid by Killer Frost and shattered against the ground.[2]

During his adventures with the Legends, John Constantine noticed that a Time Bureau agent Gary Green had socks with Beebo pictured, which Gary explained were gifted to him by his Aunt Stacy. John offered to tell a story about how once, when he was "on a massive bender", he cast a spell on a Beebo toy to make it talk. According to John, Beebo told him "things that'll make your toes curl."[3]

After the newly-freed demon Mallus cornered the Legends in 19th century's Salvation, they were assaulted by the forces from different periods of history (the Romans, pirates, and Vikings) and aided by reinforcements from the allies they befriended along the way (Helen of Troy, Nora Darhk, Kuasa, Jonah Hex, and Jefferson Jackson). While the battle raged around them, the Legends wielded the Totems of Zambesi to create a unified avatar of their power. Because Nate Heywood concentrated on Beebo when thinking of "something pure", the new totem bearers transform into a supersized version of Beebo to defeat Mallus. In this form, cheered by their allies, the Legends battled Mallus and eventually body-slammed him into the ground, destroyed the time demon once and for all. The Beebo avatar then vanished in a giant blue heart-shaped explosion.[4]

After Zoe Ramirez was injured in a fire, Curtis Holt gave her a Beebo doll at the hospital as a get-well present (against her father Rene Ramirez's objections that Zoe was too old for it).[5]

In a similar situation where a child needed to be comforted, the Legends gave Prudence Hawthorne a video game called Beebo Blox, based on the Beebo character, to calm her down as they worked to figure out how to deal with Jane Hawthorne's impending witch trial.[6]

Beebo's popularity spawned a television show, which is still running even in January 2020 that is watched by John Diggle's children.

Sargon the Sorcerer created a giant Beebo to distract the heroes of Earth-Prime from him robbing a bank, but was later knocked out by Sara Lance, making the Beebo made of a magical liquid substance lose its form.[7]

Later that month, it was announced that Ryan Reynolds was cast as detective Beebo in the live-action movie.[8]

As "the Blue God", his words were interpreted by the Vikings as commands of conquest and sacrifice.

As portrayed by Ray Palmer, Beebo encouraged belief in Jesus, science, and evolution.[1]

The avatar version projected by the Totems of Zambesi during the Legends' battle against Mallus possessed similar qualities as the usual toy, but also a cocky fighting personality, challenging the time demon to battle.[4] 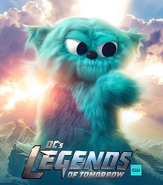 Retrieved from "https://arrow.fandom.com/wiki/Beebo?oldid=654826"
Community content is available under CC-BY-SA unless otherwise noted.