View source
watch 02:56
Doctor Strange in The Multiverse o Madness - The Loop
Do you like this video?
Play Sound

"It is time that people know that Black Lightning is back."
—Jefferson Pierce to Lynn Stewart[src]

Black Lightning is a television series based on the DC Comics character of the same name. The series premiered on January 16, 2018 and ended on May 24, 2021 on The CW.

To be continued on Crisis on Infinite Earths end variant title card for "The Book of Resistance: Chapter Four: Earth Crisis" 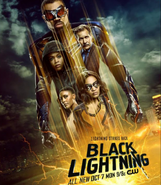