It is time that people know that Black Lightning is back.Jefferson Pierce to Lynn Stewart

Black Lightning is a television series based on the DC Comics character of the same name. The series premiered on January 16, 2018 on The CW. 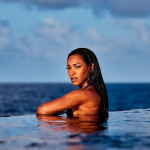