Arrowverse Wiki
Register
Don't have an account?
Sign In
Advertisement
in: Kryptonians, Characters, Characters from Earth-96,
and 7 more
English

View source
watch 01:55
Cobra Kai Season 4 - The Loop
Do you like this video?
Play Sound

"Hope is the light that lifts us out of darkness."
—Clark Kent to Lois Lane[src]

Clark Kent (born Kal) is the editor-in-chief of the Daily Planet. He is the husband of Lois Lane and the father of Jason. He became the superhero known as Superman and operated in Metropolis. During the Anti-Monitor Crisis, he was revealed to be the Paragon of Truth.

As a Paragon, he was supposed to be one of the seven surviving individuals in the multiverse before Lex Luthor of Earth-38 rewrote reality and replaced him. He was resurrected when Oliver Queen and the Paragons restored the multiverse, including Earth-96.

Like the majority of Kal's doppelgangers, he was raised as Clark Kent and grew up to become the hero known as Superman. As Superman, Clark had several "go-arounds" with Lex Luthor and once went "nuts and fought himself". He also at some point married Lois Lane and had a son, Jason. After a reject from Gotham believed the Daily Planet wasn't covering him enough, he played a "practical joke" and gassed the building, killing nearly everyone inside, including Lois and countless friends and coworkers of Clark's.[1] Despite this great tragedy, Clark held on to hope, as he believed it would shine through the darkness, a belief which he symbolized by embracing a black and red crest.[2]

After the Monitor found a Kryptonian who felt great tragedy to be the "Paragon of Truth", Clark was visited by Clark Kent and Lois Lane of Earth-38, and Iris West-Allen, who explained the situation to him; the Paragons were needed to save the multiverse, but Lex Luthor was out to kill all of its Supermen. Luthor promptly arrived and used the Book of Destiny to make Earth-96 Clark attack Earth-38 Clark. They briefly fought, but after Lois knocked Lex out, they were able to get through to Earth-96 Clark and stop him. They returned to their base of operations, the Waverider, where Clark met his Earth-38 counterpart's son, as well as Clark's Earth-1 doppelgänger, Ray Palmer. They attempted to use a machine to locate the other Paragons, but only found one; Kate Kane, who was in the room with them.[1]

During the Anti-Monitor Crisis, Clark joined the Council of Supermen.[3]

Clark then teamed up with J'onn J'onzz to defend the remaining quantum towers, but they were ultimately unsuccessful as every Earth was lost to the antimatter wave. They were forced to return to the Waverider in Earth-1, the last universe remaining.

Once back on the Waverider, the heroes were greeted by Harbinger, who had returned after mysteriously disappearing. Pariah also appeared and the heroes realized that Harbinger's return was a trap by the Anti-Monitor, who proceeded to incapacitate the heroes, kill Mar Novu, and destroy Earth-1. Realizing what the Monitor wanted him to do, Pariah managed to send the 7 Paragons to the Vanishing Point where the Anti-Monitor couldn't reach them as the Waverider was destroyed and remaining heroes killed by the antimatter wave. At the Vanishing Point, the Paragons witnessed as Clark slumped over, disappeared and was replaced by Lex Luthor, who had used the Book of Destiny to make himself the Paragon of Truth, switching places with Clark and succeeding in his mission of killing all Supermen.[2]

One month later, after the end of the Crisis with the Paragons and the Spectre creating a new multiverse, including a new Earth-96, Clark was restored alongside all of his fellow denizens. It appears that no great tragedy occurred to him in the new timeline, since Clark was seen wearing his classic red and yellow crest on his suit while flying around the Earth as Superman.[4]

Clark has a similar personality to his other doppelgängers, being very kind, humble, and friendly even to complete strangers. However, Clark became reclusive after he lost his friends and his wife, Lois Lane, to the Joker's attack.

"They would want your memories of them to lift you up, not drive you to darkness. That's the truth, Clark, and the truth means everything to you. Remember who you are."
—Lois Lane to Superman[src]

When Clark found out that he might be the key to saving the multiverse, he immediately suited up, prepared to face Lex Luthor. Lois Lane noted him for his caring attitude, despite Clark's selfish claims (while under Lex's influence) that he did not care about their universe because he failed to protect own his loved ones.

After Lois and Iris West-Allen freed Clark from Lex's control, he regained his hopeful optimism and sense of humor. Clark expressed his notions of hope to Lois and Mar Novu aboard the Waverider, believing that it cuts through even in the darkest of times, and kept him going despite his personal losses.

"Put this on, this crest—I made a promise to keep fighting no matter what."
"Hey, why'd you add black to it?"
"Because, Lois, even in the darkest times, hope cuts through."
—Superman on his different suit to Lois Lane[src] 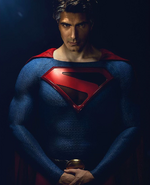