Crisis on Infinite Earths is the name of the sixth annual Arrowverse crossover event between Supergirl, Batwoman, The Flash​​​​​, Arrow, and DC's Legends of Tomorrow. Additionally, events in the Black Lightning episode "The Book of Resistance: Chapter Four: Earth Crisis" and a two-issue comic, Crisis on Infinite Earths Giant, tie into the crossover. It began over three nights in December 2019 from December 8 to December 10 and concluded on January 14, 2020.

Ten thousand years ago on the planet Maltus, Mar Novu experiments with time travel to witness the birth of the universe. Instead, Novu is transported to the netherverse at the dawn of time, leading to the creation of the Anti-Monitor.

In the present, having already destroyed multiple Earths, the Anti-Monitor sends an antimatter wave to Earth-38. There, Querl Dox detects a wave approaching Argo City prompting Kara Danvers to warn her mother Alura Zor-El, her cousin Clark Kent and his wife Lois Lane. Clark and Lois safely send their son Jonathan to Earth just before the wave erases Argo. Lyla Michaels, now a Harbinger, recruits Oliver Queen, Mia Smoak, Barry Allen, Kate Kane, Sara Lance, Ray Palmer and the Kents to the D.E.O. on a briefing of the current status of the Crisis as Novu raises a Quantum tower to impede the wave. Meanwhile, Alex Danvers reluctantly works with Lena Luthor to figure out a way to evacuate the Earth's inhabitants to Earth-1. Brainy locates Jonathan's pod on Earth-16, so he, Lois and Sara head to retrieve him while the other heroes fend off the Anti-Monitor's Shadow demon army at the tower. Novu teleports the heroes back to Earth-1 but Oliver refuses to leave so he temporarily nullifies Novu's powers. Eventually, a shadow demon injures Oliver and Novu brings back a dying Oliver to Earth-1 where Sara and Barry say goodbye. Harrison Nash Wells, now a "Pariah" for releasing the Anti-Monitor from his chamber beneath Central City, warns everyone that events have changed and that they are all doomed.

In the wake of Oliver's death, which cannot be undone due to the Anti-Monitor's growing power, Novu consults the Book of Destiny and learns of seven Paragons who can stop the Anti-Monitor. Novu reveals four known paragons that of Kara - the "Paragon of Hope", Sara - the "Paragon of Destiny", a second kryptonian who has suffered "more than any mortal man" - the "Paragon of Truth" and the "bat of the future" - the "Paragon of Courage". Clark, Lois and Iris West-Allen travel to Earth-96 where they recruit that Earth's Superman while Kate and Kara travel to Earth-99 where they find an elderly crippled Bruce Wayne, who Kara discovers he had killed this Earth's Superman leading to a confrontation between the two which results in Bruce-99's death. Meanwhile, Barry, Mia, and Sara get help from John Constantine to revive Oliver's soul. Constantine detects a working Lazarus Pit on Earth-18. There, they revive Oliver but not his soul as the antimatter is blocking them from bringing it back. Later, unbeknownst to everyone, Harbinger is contacted by the Anti-Monitor.

With Cisco Ramon's help, Ray's Paragon detector detects Barry as the "Paragon of Love", Kate as the true "Paragon of Courage", J'onn J'onzz as the "Paragon of Honor" and Ryan Choi as the "Paragon of Humanity". Iris, Ray, and Ralph Dibny head to Ivy Town to recruit a reluctant Choi. Meanwhile, Constantine and Mia, who are joined by John Diggle, travel to Earth-666 to pick up a card from Lucifer Morningstar that takes them to Purgatory. When they find Oliver's soul, they are approached by Jim Corrigan, who passes on the Spectre's powers. After accepting this, Constantine, Mia, and Diggle are sent back to Earth-1. After the Monitor restores Cisco's powers, he, Barry, Caitlin Snow and Nash return to the chamber where they find an antimatter cannon powered by Earth-90 Flash. Cisco frees Barry-90 prompting the canon to go critical. Nash recruits Jefferson Pierce, from another Earth, to maintain the canon. Barry-1 volunteers to destroy the cannon but Barry-90 steps in to take his place, claiming that Novu didn't state which Flash would die in the Crisis. With the cannon destroyed, the heroes regroup at the Waverider, where a brainwashed Harbinger appears to wipe out the remaining Earth. Just before she can do so, Nash sends the Paragons to the Vanishing Point on Novu's orders.

Months after the multiverse was destroyed, the Paragons struggle to survive at the Point. Back in Purgatory, Corrigan continues to train Oliver to master the Spectre's power. Oliver then contacts the Paragons and unlocks Barry's full potential. With his strengthened speed, Barry takes Kara, Choi, and Lex to Moltus in the past but loses the Paragons in the Speed Force after the Anti-Monitor attacks them. On Maltus, Kara, Choi, and Lex convince Novu not to go forward with his plan as Barry rescues the other Paragons. The Paragons then battle the Anti-Monitor at the dawn of time until Oliver uses the Spectre's power to defeat the Anti-Monitor and reset the universe by sacrificing himself a second time.

Waking up in a newly restored universe, the Paragons discover they are the only ones who can remember the events of the Crisis. They also learn that Earth-1 has merged with Earth-38 and Jefferson's Earth, later designated as Earth-Prime. J'onn restores their allies' pre-Crisis memories while Sara believes Oliver is still alive but is indeed dead. Later that night, the shadow demons attack the Paragons. A restored and remorseful Nash discovers the Anti-Monitor is still alive so he, Ray, and Ryan create a device that would eternally shrink the Anti-Monitor. During a final battle against the Anti-Monitor, Kara throws the device at him, sending him to the microverse. In memory of Oliver, Barry, Kara, Sara, Kate, Clark, J'onn and Jefferson hold a memorial service as Barry reveals a new base of operations for the team. 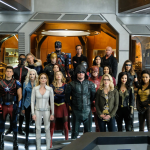