"He was the most brilliant mind I ever met. They all were. Whatever the problem, you could count on a Wells... a council of them, to have the answers."
—Barry Allen[src] 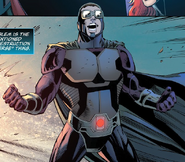