Arrowverse Wiki
Register
Don't have an account?
Sign In
Advertisement
in: Episodes, The Flash (The CW) episodes, Citations needed, Season 2 (The Flash)
English

View source
watch 02:56
Doctor Strange in The Multiverse o Madness - The Loop
Do you like this video?
Play Sound

"The Race of His Life"

Post 40
"Invincible" is the twenty-second episode of the second season of The Flash, and the forty-fifth episode overall. It aired on May 17, 2016.

A multitude of meta-humans from Earth-2 are assaulting Central City and the police, injuring Captain Singh, but they're grabbed up by the Flash. At the paper, Iris is expounding on the "Metapocalypse" while Wally West goes out to help.

At S.T.A.R. Labs, Caitlin has shown up; she's in shock and being cared for by Henry. Caitlin doesn't believe they can stop Zoom, but Barry has newfound confidence after returning from the Speed Force. However, the team is stressed that Barry is too overconfident.

At Mercury Labs, Dr. Tina McGee is applauding one of her scientists' work when the structure is assaulted by Black Siren, the late Laurel Lance's Earth-2 doppelgänger. At S.T.A.R., Caitlin is based out when Cisco comes in to beware of her and Barry. As he's conversing with Barry, he vibes, seeing a dead winged creature. At that point he comes out of the daze, confounded, and they get a call from Mercury Labs. Barry gets ready and heads out. Barry spares McGee from falling destruction, and is astonished when she uncovers she knows his name.

Leaving is the Black Siren — Black Canary (Laurel Lance's) Earth-2 partner, who has brought the structure down.

At S.T.A.R., McGee shakes Henry's hand. She recommends that it probably won't be Zoom, yet rather Harrison Wells who was focusing on their structure. Harry comes out and says that is not likely, amazingly.

Out in the city, Wally handles a tote snatcher, who ends up being a metahuman. Before the meta can turn on him, however, he's "booted" by the police. Joe reprimands Wally for getting included, however Wally is resolved to compensate for past wrongs.

At S.T.A.R., Harry strolls in to discover Caitlin running tests on Jesse. Harry discloses to her that she's not a metahuman, yet they can utilize her astuteness to help in the battle.

Out of nowhere, Caitlin has a dream of Zoom, yet discloses to Harry she's fine when he inquires.

Barry brings a "black box" once again from the Mercury Labs site, and leaves it with the group to inspect.

Before Barry leaves the structure, Henry pulls him aside to attempt to converse with him. Barry discloses to him that his time in the Speed Force transformed him — and he's simply not apprehensive any longer just because. Henry advises him to be cautious in any case, and Barry gets annoyed with him. The two present appropriate reparations, yet Barry is still extremely certain… until as he's going to leave a caution goes off at the Police Department. Barry takes off after Zoom.

Zoom is in Barry's lab, looking at his mother's homicide board. He reveals to Barry that whatever he does, it won't be sufficient. He says that they're a similar individual — the equivalent terrible foundation, a similar explanation behind running. He says that Barry rejects his resentment, however, and that halting to spare individuals is the reason he'll lose.

At S.T.A.R., Barry advises the group that they have to take out Zoom's military. They will make a vibrational tech that can bring down the Earth-2 metas, similar to the manner in which Cisco figured out how to crush the Time Wraith.

Joe pulls Barry aside to discuss his energy.

Cisco vibes, seeing a structure going to crumple with a gathering of dead winged creatures at his feet, however then comes out of it and can't make sense of why.

Joe discloses to Barry what occurred with Wally. He says that reasoning you're powerful "isn't any sort of defensive layer," and asks Barry to converse with Wally as The Flash and advise him to be careful.

Cisco, in his lab, is battling with a condition. Caitlin turns upward and sees Zoom, yet when Cisco looks, Zoom isn't generally there. She reveals to Cisco that she sees him all over the place, and she's apprehensive constantly. She's stressed she can't proceed onward, however Cisco embraces her and discloses to her that she'll recuperate in the end.

In his vehicle, Wally is tuning in to the police band when The Flash comes to converse with him about his endeavors to help. He reveals to him that the battle with Zoom isn't his battle, however Wally says that it's everybody's battle, and it's up to every one of them to secure the city. The Flash gets summoned to a battle at fifth and Main — where he meets Black Siren.

As The Flash circles Laurel, he gets inquires as to why she assaulted Mercury Labs. She says she gets a kick out of the chance to watch things fall, and that he's straightaway, and afterward assaults him with her sonic shout. As she's remaining over The Flash monologuing, Wally flies into the crossing point, hitting her with his vehicle and revealing to The Flash to get in.

Barry does, yet then takes off out of the vehicle and heads to S.T.A.R.

Joe is irate with Barry for not halting Wally. Barry is still truly radiant, prompting Iris cornering him to give him the "no doubt about it" talk. She advises him that a little dread can be a sound thing.

At Zoom's safehouse, Siren comes to him and Zoom advises her to take out some more structures that are diverting Team Flash.

At S.T.A.R., Cisco has made a "dimensional tuning fork" that will send a heartbeat through the city taking out anyone from Earth-2.

Barry needs to go stop Siren, who's assaulting a structure, however Harry needs him to go around the city making a field that will permit them to utilize the beat. Cisco says he has a horrendous thought.

Somewhere else in the city, Black Siren is conversing with herself when Reverb and Killer Frost appear at welcome her.

She discloses to them that she thought they were dead, and they state Zoom needs to believe that for the present. Cisco bids to her sense of self, asking her for what valid reason she's serving Zoom when they could be divine beings.

At S.T.A.R., Harry is prepared to utilize the tuning fork. Barry takes off to make a hindrance around the city that will keep the vibrations contained.

Alarm asks Cisco and Caitlin what they will likely overwhelm Zoom. They give her one, which she says she enjoys, however then she tosses something to Cisco. what's more, he gets it with his correct hand. She says that doppelgängers are perfect representations of each other, and Reverb was left-given. She pursues them and, after Cisco shoots her with a startling light emission, the Tuning Fork begins to produce results around the city. Harry's earphones work, yet Jesse's don't, so he offers his to her. While the remainder of the Earth-2 inhabitants breakdown, Zoom opens a penetrate and heads back home.

The Flash gathers up the bad guys and tosses them in the Pipeline, where the group discusses what they're doing. Caitlin says that ensuring individuals is something that keeps her normal.

The Flash shows up at the police office to tell Joe and the Captain that Zoom escaped. Barry comes, pulling Joe aside and revealing to him that he won't prevent Wally from attempting to be a legend, and he doesn't think Joe ought to either.

That night, Barry heads home, where Team Flash is having a social affair with Henry and Tina McGee. Henry and Tina appear to be taken with each other.

Barry requests that Iris try their relationship out, and both Joe and Jesse acclaim Wally for helping save The Flash.

The group remains around the table, toasting to family, and Cisco out of nowhere vibes on progressively dead flying creatures. He glances behind himself in the vision and sees Earth-2 Central City crumbling.

Vibe says he sees Earth-2 parting into equal parts straight down to the posts — and simply at that point, Zoom comes to seize Henry. Barry takes off after them, following Zoom to his youth home, where Zoom slaughters Henry to make Barry simply like him. 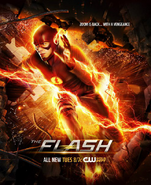 "Zoom is Back... With a Vengeance"