watch 01:29
Wiki Targeted (Entertainment)
Do you like this video?
Play Sound

"There are more like me. And one day, they will free this world."
—The man's last words to Dark Arrow[src]

An unnamed man was a vigilante on Earth-X and a member of the Freedom Fighters.

The individual, having taken up a life of vigilantism as part of the Freedom Fighters, tried to stop the Dark Arrow's plans, only to be defeated and killed by him. With his dying breath, the man swore that the Earth would one day be free.[1]

The man's death was avenged when Dark Arrow and the other members of the New Reich were killed and/or defeated by the Freedom Fighters with the help from the heroes of other Earths,[2] eventually toppling the Nazi government and freeing Earth-X. This also made the man's words to Dark Arrow prophetic, as he didn't die in vain.[3] 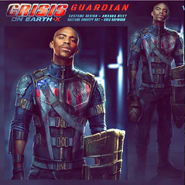 Retrieved from "https://arrow.fandom.com/wiki/James_Olsen%27s_Earth-X_doppelgänger?oldid=736158"
Community content is available under CC-BY-SA unless otherwise noted.