"Ironically, on my—on our Earth, this helmet stood for hope."
—Harry Wells to Jay Garrick[src]

"Never thought I'd see that again. It was my father's, from the War of the Americas."
—Hunter Zolomon on the helmet[src]

The helmet originally belonged to James Zolomon which he used in Earth-2's War of the Americas. One night his young son caught James abusing Ashley Zolomon to which James gave the helmet and forced his son to watch Ashley's murder. Hunter was sent to the orphanage, yet he kept the helmet as a memento ever since. At some point of time, he additionally decorated the military helmet with golden-colored wings made of some sort of metal. It is unknown where the helmet was located when Hunter was convicted and imprisoned in the asylum for his crimes as a serial killer. However, he somehow managed to regain hold of the object.

Years later, Hunter obtained super speed and became a "speed demon" known as Zoom, intent on proving himself the greatest speedster in the multiverse.[1] Sometime after that he encountered Jay Garrick, the Flash of Earth-3, and imprisoned him at his lair. Hunter was eventually inspired by Jay's superhero identity to become a superhero himself, also known as The Flash. He used a suit similar to his father's from the war, along with the helmet, during his time as the superhero. That resulted in the helmet representing hope for the people of Earth-2.[2]

One day, an interdimensional portal was opened in the sky.[3] The helmet got sucked into it, and eventually ended up on Earth-1. It was noticed by Eobard Thawne, Cisco Ramon and Joe West during their "goodbye", and due to the helmet's unknown whereabouts, the latter immediately asked about it. Thawne simply answered that it's "his cue to leave".[4]

During the crisis on two Earths, Hunter left a time remnant of himself on Earth-1 as he had to appear on Earth-2 as Zoom; the time remnant (pretending to be the Flash of Earth-2) retrieved his helmet from Team Flash.[3] After Zoom killed said time remnant before Team Flash's eyes,[5] the helmet remained on Earth-1, kept on display to honor its "deceased" owner.[6] After finding out Zoom's real identity, Team Flash still kept the helmet to keep Barry motivated and for Cisco to focus on his "Vibe" powers.[1]

After Zoom got defeated by Team Flash and they freed the masked prisoner that was kept locked up, Jay noticed the helmet explaining that the object is the only thing that Hunter didn't steal from him, which Harry Wells stated was a symbol of hope. For that sentiment, Jay added the helmet to his Flash suit so he could keep giving hope to people, taking something away from Hunter and make it his own. Caitlin Snow complimented Jay, saying that the helmet suits Jay.[2]

Jay continued wearing the helmet as the Flash of Earth-3, most notably in defeating the Trickster and the fight against Savitar.[7] After Jay decided to stay in the Speed Force, he gave his helmet to Barry. Barry put it up on the same pedestal to remember him just as he did with Hunter's time remnant.[8]

When he later gets released from the Speed Force prison, Jay is given his helmet by Vibe during Team Flash's confrontation against Savitar and Killer Frost.[9] 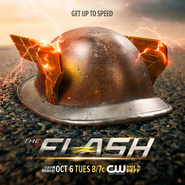 "Get Up to Speed"
Add a photo to this gallery

Retrieved from "https://arrow.fandom.com/wiki/Jay_Garrick%27s_helmet?oldid=753924"
Community content is available under CC-BY-SA unless otherwise noted.