Arrowverse Wiki
Register
Don't have an account?
Sign In
Advertisement
in: Objects, Suits, Allusions to the comics
English

View source
watch 02:07
Spider-Man: No Way Home Trailer Dropped - The Loop
Do you like this video?
Play Sound

"A man in a yellow suit tried to steal another tachyon prototype last year."
—Tina McGee[src]

The Reverse-Flash suit was a protective suit presumably created by Eobard Thawne which he uses as the Reverse-Flash, which veils his identity from his victims.

It is almost exactly the same as the Flash suit worn by Barry Allen, but made from a more leathery/rubbery material, and instead of being red with yellow lightning bolts, it is yellow with red lightning bolts, and the yellow fades to black starting from the torso and ending with the limbs (similar to the Arsenal suit). The symbol on the chest is backward, seemingly a reference to his title of being the "reverse" of The Flash.

While in the suit, and using his speed to blur himself, Eobard Thawne becomes very disturbingly animalistic, becoming more confrontational and howling at his enemies. He seems to enjoy his anonymity in the present, hence his more vicious demeanor.

A holographic projector is installed into one of the gloves of the suit which he can use to talk to Gideon.[1]

The suit seems to have the same if not superior technology to that of the Flash's suit, including that it is friction-proof, and contains not only a holographic interface with Gideon, but can also be stored in Thawne's ring as well, a capability that Barry's suit has only recently been equipped with, thanks to Ryan Choi.

During Grodd's second rampage, Cisco Ramon came up with an idea to use a spare Reverse-Flash costume which was found in the time vault and wore by Harry Wells in order to pretend to be Eobard and gave an overdose of Caitlin Snow's serum.[2]

Barry decided to destroy the suit as it served as a reminder of the pain Eobard had caused. However, the suit was not destroyed as Harry donned it in order to help train Cisco's vibe abilities more effectively as fear triggers these powers.[3]

At some point, Eobard Thawne joined the New Reich of Earth-X, during which time he made some changes to his suit. The red lightning bolt emblem on his chest has been replaced with the double-lightning runic symbol of the SS, used on members of the paramilitary's uniforms, and some sort of retractable mask was placed on the mouthpiece.[4]

Ripped from the timeline

In the erased future that Nora West-Allen hailed from, at some point in or before 2032, the Reverse-Flash suit and Eobard Thawne's tachyon device were put on display in the Flash Museum's Hall of Villains.[5] Later Trevor Shinick contacted Dexter Myles to make sure that the suit and the ring in it got buried with hi owner who's about to be executed. But Thawne escaped and used it to face off with the Flash and his daughter. Due to Cicada's dagger being destroyed this future was erased but Thawne escaped that timeline with the suit and the ring meaning that this suit was ripped from this timeline.[6] 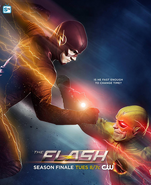