Start a Wiki
watch 01:00
Supergirl Season 2: "Team Up" Trailer
Do you like this video?

Season 2 is the second season of Supergirl. It will premiere on The CW.[3] 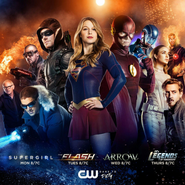 Superman first look
Add a photo to this gallery

Supergirl Teaser The CW
Supergirl Back to Back Trailer The CW

Retrieved from "https://arrow.fandom.com/wiki/Season_2_(Supergirl)?oldid=214882"
Community content is available under CC-BY-SA unless otherwise noted.