Like last season, this season is broken up into story arcs which are called "Graphic Novels". The first three episodes of the season were a continuation of "Reflections and Lies"[2] and the next story arc has not been given a specific title.

"The Future Favors the Fast" 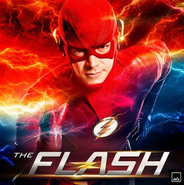 Retrieved from "https://arrow.fandom.com/wiki/Season_7_(The_Flash)?oldid=764971"
Community content is available under CC-BY-SA unless otherwise noted.