"I wear a hood and I put arrows into criminals, so when it comes to complexity... I grade on a curve."
—Oliver Queen[src]

The Arrow suits were a series of protective suits designed and created by Talia al Ghul and later upgraded by Lodai. It was later upgraded again by Cisco Ramon to be utilized by Oliver Queen as the Hood, later the Arrow.

During his time in Russia in 2012, Oliver Queen was presented with a kevlar-lined suit by Talia al Ghul, along with Yao Fei Gulong's old hood. Using this, he decided to become "something else".[1] When he returned to Starling City, he brought the suit with him.

Oliver originally used dark green grease paint to help protect his identity, but when he met Barry Allen, he was given a mask that would help better conceal his identity and not impair his vision while aiming.

When Team Flash briefly visited Team Arrow in Starling City, Cisco Ramon designed a new suit for Oliver, making it out of a polymer Kevlar weave; it was also 25% lighter and could carry 15% more gear. He continued to wear this suit throughout his career as the Arrow.[2]

The suit was later confiscated by the police and destroyed. However, Oliver still kept the original suit.

The suit later appeared in a hallucination when Oliver was abducted by the Dominators. The suit was worn by John Diggle. It was similar to the one Oliver wore but it had the holster from the Green Arrow suit.

Later, after a Vertigo-induced hallucinations convinced Oliver that he should return to his original mission to take down Ricardo Diaz, Oliver wore the original suit once again, while also using grease paint instead of the mask.[3]

"Turns out S.T.A.R. Labs' industrial fabricator was based out of Starling, so... polymer Kevlar weave. It's 25% lighter and can carry 15% more gear."
—Cisco Ramon to Oliver Queen[src]

"The Arrow" and a boxing glove arrow.
Add a photo to this gallery

Oliver as the vigilante, "The Hood".

"The Hood" standing above Starling City.

"The Hood" aiming his bow. 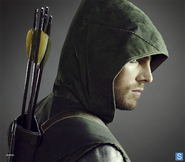 "The Arrow" starts to wear a mask.

Oliver Queen as "The Arrow".
Add a photo to this gallery

"The Arrow" in his updated costume.

"The Arrow" in "Fight Club".
Add a photo to this gallery

Retrieved from "https://arrow.fandom.com/wiki/The_Arrow_suits?oldid=746432"
Community content is available under CC-BY-SA unless otherwise noted.