Arrowverse Wiki
Register
Don't have an account?
Sign In
Advertisement
in: Episodes, The Flash (The CW) episodes, Article stubs, Season 2 (The Flash)
English

The Race of His Life

View source
watch 01:33
Wiki Targeted (Entertainment)
Do you like this video?
Play Sound

"Yep. It's that simple. But if, at any point, you decide you don't want to race anymore, dear old dad number two is a dead man, as well as your little fan club."
"They're not my fan club. They're the reason that I'm running, why I'm gonna beat you."
"Let's see what you're made of, 'Flash'".
"Just say when, Zoom."
"Run, Barry. Run!"
—Hunter Zolomon and Barry Allen

"The Race of His Life"

"Flashpoint"
"The Race of His Life" is the twenty-third and final episode of the second season of The Flash, and the forty-sixth episode overall. It aired on May 24, 2016.

Having just witnessed Hunter kill Barry's father in front of him, Barry is sent into a blind rage. Barry chases after Zoom, now faster than him, and is able to beat him up. However Zoom manages to create a time remnant, which is what Barry ends up catching instead. While Barry is moments away from killing Zoom's time remnant, the real Zoom appears and kills the remnant himself.

After Henry's funeral, Hunter challenges Barry to a race to determine who is faster, threatening to kill everyone Barry loves if he refuses. Harry discovers Hunter is in possession of a Magnetar, a device that will destroy every planet in the Multiverse except Earth-1 which requires both their speeds to power. When Barry refuses to back out, the team locks him in the pipeline and forces Hunter back to Earth-2 themselves, but Hunter abducts Joe in the process. Wally discovers this and frees Barry, who agrees to Hunter's race. As Barry and Hunter race around the Magnetar, the former creates a time remnant to free Joe and destroy the machine, but at the cost of dying while the prime Barry defeats Hunter, who is then taken away by Time Wraiths for his crimes against the timeline.

Barry rescues the man in the iron mask, who is revealed to be the real Jay Garrick, Henry's Earth-3 doppelganger. Harry, Jesse and Jay return to Earth-2, from where Jay plans to return to Earth-3. Barry, still feeling broken and defeated, travels back in time and stops Eobard Thawne from killing Nora. 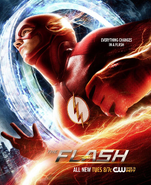 "Everything Changes in a Flash"