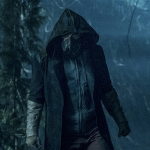 "In the end, there was only one, a single black infinitude. Then, the infinitude found release and, finally, the darkness broke, filling it with life, with the Multiverse. Every existence multiplied by possibility and spread out before space and time in infinite measure. Civilizations rose and fell, and rose again across reality's grasping expanse. Life, a precious gift, persevering in the face of every obstacle. Until, finally, the Age of Heroes was born."
—Oliver Queen on the new multiverse[src]

Hi everyone. I am NexusKilian I am a newcomer to editing wikis, but I'm trying to make my mark. I hope I can still edit a lot on this wiki since my love for the Arrowverse is boundless. Here's some information about myself.

Mar Novu/The Monitor
Add a photo to this gallery

Mobius/Anti-Monitor
Add a photo to this gallery

"Dying's the easy part. The dead are at peace, but the real heroes are the ones who have to keep going."
—Oliver Queen to Barry Allen[src]

"Keep riding the lightning, son. I know you'll make us all proud."
—Barry Allen's last words to his Earth-1 counterpart[src]

"Where is the future? Right here. And who's life is this? Mine. What are you gonna do with it? Live it. By any means necessary."
—Jefferson Pierce to himself as he was containing the energy from the antimatter cannon[src]

"It doesn't take a hero to know what pure evil looks like."
—Kate Kane to Alice[src]

"God, being yourself, that is a magic stronger than any wish. Being truly okay with myself, scars and all, is how the right people truly found me."
—Nora Darhk[src]

Shows ranked in my opinion

When we all watch the Arrowverse shows, the question a lot of people ask is "What is your favorite?" Hence why I decided to rank my favorite shows, on my profile, from 1 (favorite) through 6 (least favorite). I won't be ranking The Flash (CBS), Birds of Prey and Constantine, because I haven't watched these shows and can't form an opinion about them. And underneath I have also ranked the seasons from each show from favorite to least favorite.

Nora Darhk/Fairy Godmother
Add a photo to this gallery
Retrieved from "https://arrow.fandom.com/wiki/User:NexusKilian?oldid=684595"
Community content is available under CC-BY-SA unless otherwise noted.