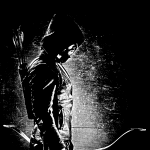 "Your sister looks like a pretty blonde cheerleader. J'onn J'onzz looks like a monster. I will never be tolerated here on Earth. The more time I spend as Hank Henshaw, the less I have to face what I've lost. But when I change my state, shapeshift into someone new, call upon new powers, I get one step closer to becoming the Martian Manhunter forever. And he creates panic and hysteria. I know, I have seen it. It's not only that I'm better off as human. Everyone is."

"Oliver Queen is dead. Eventually to be reborn as Ra's al Ghul. But for now, only the Arrow, Al Sah-him, shall remain."

"My name is Barry Allen, and I am the fastest man alive. When I was a child, I saw my mother killed by something impossible. My father went to prison for her murder. Then an accident made me the impossible. To the outside world, I am an ordinary forensic scientist, but secretly, I use my speed to fight crime and find others like me. And one day, I'll find who killed my mother and get justice for my father. That day is today."

"Sitting at that desk, staring out that window, watching this city that we grew up in rot at its core, you find a way not to break. Bruce didn't leave Gotham without a fight."

"We must put faith in ourselves, but instead, we look up to him, with big glassy eyes because we think he's invincible. It's my duty to dispel the world of that notion. And when he dies, they will finally wake up and see him for what he really was. A false god."

"Villains or vigilantes? Criminals or heroes? From Star City to Central City to Gotham City, Americans have debated this question. Do the ends justify the means? Does the law have to be broken to uphold it?"

"Oh please. Your little secret is one of the more underwhelming revelations i have uncovered. I was born on the same evening as you were. January 7th, the night S.T.A.R labs' particle accelerator bathed Central City in gene altering dark matter. We were both struck by lightning."

"That's why Bruce became Batman. To play by his own rules. It made him terrifying to his enemies.

People aren't afraid anymore. An army may not scare them, but that will."

"They shouldn't fear us for what we can do. They should rely on us when they need us."

"Shawn i want you to know something. Anytime you need me, I'll be there for you. I couldn't run like your dad, but I'll be there in a flash."

"I told you Oliver. You infect every life you touch. And now do you realize why? It's because your crusade was based on a lie. You used your father's memory to justify a killing spree. There's a price to be paid for that Oliver. Your mother paid it. Your friend Tommy paid it, Laurel. Do you really want to tell me that John Diggle and Felicity Smoak's lives are better having known you?"

"Didn't know this was a costume party."

"Let me guess. Red, the color of our birthstone. To remind us where we came from."

"This time, you're the only Superman we need"

"I'm going to tear everything he cares about away from him, destroy those who choose to follow him, corrupt those he loves. Once he has lost everyone and everything he values, I will drive an arrow through his eye."

"I could have all the speed in the world. I'm not complete without you."

"She did more for this school than anyone who's ever gone here, so you can scrub her name from every plaque and banner and roster, but you will never erase her or the effect she's had on the people here."

"Kara Danvers is my favourite person. She saved me more times than Supergirl ever could. So, just think about that while you're trying to get rid of her."

"Tina, I watched myself die. It really brought home what you've always tried to make me understand. That I am only a man. And like all of us, I'm on a journey of a birth, a life, and a passing."

"My name is Oliver Queen. After five years on a hellish island, I have come home with only one goal. To save my city. But to do so, I can't be the killer I once was. To honor my friend's memory, I must be someone else. I must be something else."

"Forgive me, but to me, you've been dead for centuries."

"What did it feel like? Living in that house, day in, day out, pretending to be her mother? Watching her sleep, so vulnerable. Knowing that any minute you could rip her apart with your bare hands. You're not a mother, you're a monster."

"I have taken measures to prepare for battle with the Flash should such a time come. Central City has become an abyss of darkness and fear under the heel of a criminal horde. The first Nightshade delivered justice to gangland. I will pay for my father's sins. I will hunt down the jackals hiding in the ivory towers of the constitution. The hucksters who let the guilty run free."

"The city still needs saving. But not by the Hood. And not by some vigilante who's crossing names off a list. It needs something more..."

"It needs a hero Oliver."

"Like you helped your mother? Or Wally? Or me? You keep messing with everyone's lives, wrecking everything, and we're left behind to pick up the pieces from your mistakes. Some things you break can't be put back together."

"Congratulations daddy. Now both of your daughters are killers."

"This isn't my family. I remember my parents. I remember Krypton. I remember being alone in that pod and not knowing if I was going to see anyone ever again. And then I landed here. And no one asked me if I wanted these powers, but I have them. And all I want to do is help people with what I've been given, and no one will let me."

"I was married once, too. Tina always said that keeping me running was her purpose in life, so as someone who's been running for 30 years, let me tell you. Sometimes, in order to find your purpose as a hero, you gotta take a couple steps back. Reverse the way you see the situation and see a bigger picture."

"There's Flash and--and Supergirl and--and people with actual powers now. Whatever needs to be done, they can handle it. We--we finally have a chance to be happy. I mean, why--why can't you just for a second accept that maybe this is your reward for all of the sacrifices you have made?"

"I didn't make those sacrifices for a reward, Thea. I did what I did because I thought it was right."

"Do you remember what you said when we discovered my powers? You said it was a gift. A blessing from God. It's still a gift. It's still a blessing from god. And I intend to use it. Not just for the girls, but for all the other people out there who need me."

"Everyone dies, Ramsey. Maybe the only thing that makes it bearable is to find some meaning in it."

"Well, that means I'm making the greatest sacrifice of all. Don't you see? What I'm becoming, this is the cure. I am the answer, Flash, to the greatest mystery of all. Life eternal."

"Strange visitor from another planet comes to Earth with powers and abilities far beyond those of mortal men? Clark. Clark always said yes to anyone with a badge or a flag. He gave them too much power. My parents taught me a very different lesson... Life only makes sense if you force it to."

"What I'm trying to tell you is my species has ancestral memory. And my ancestors, very bad people. They were collectors, conquerors! I remember everything!"

"In short you rebooted me. Aligned me with my more... emotionless ancestors. And that was a calamitous mistake."

"Pretty frightening, how you and your friends were caught last night. What was it again, a demon? The guys at the station think you're all on drugs, you know, or crazy. But I know better. I know you really did see a demon. He was red as blood, wasn't he? And fast, like a flash. So if you care about Pike, you'll tell us where he is, because Lila, if we don't find him, the Flash will."

"Earlier today, I was looking at Sara, I realized something. One of these days it's going to be me. And this... This life that i've chosen. It only ends one way."

"Believe me, you don't want to see me when I lose my patience."

"You look so young. And I could kill you right now so easy. What I wouldn't have given... All those times to have you like this. So... helpless. But fate, it's tricky, isn't it? I come here to destroy you... And then to get home, I have to be the one who creates you. But I will say, it's been an education... Watching you grow up all these years. Science fairs and soccer games. No hint, no sign, no trace of the man you will be one day for whom I have nothing but hate. And to be clear, nothing is forgiven. You will be eradicated. I promise you, Barry Allen, that you will die."

"We buried a body this morning. When did you have time to eat?"

"When I was a child, my world ended. But I was saved. Sent to Earth to protect my baby cousin, Kal-El. But Krypton's destruction sent a shockwave that knocked my ship off-course, into the Phantom Zone. Somehow, my pod got loose, and I made the long journey to Earth. Though I was still a child when I arrived, my cousin had already grown up to become Superman. I hid who I really was until one day, my adoptive sister Alex was in danger, and I was forced to reveal myself to the world. From that day on, I became Supergirl. Now, I work in secret with my sister and the DEO to fight alien menaces that threaten the Earth and others that would cause my city harm. I have friends, and allies. I have a family. After so many years of being lost, I am finally home."

My favourite characters on Arrow

My favourite characters on the Flash

My favourite characters on Supergirl

My favourite characters on Legends of Tomorrow

My favourite characters on Batwoman

My favourite characters on Black Lightning

Retrieved from "https://arrow.fandom.com/wiki/User:Xandermcc?oldid=709357"
Community content is available under CC-BY-SA unless otherwise noted.