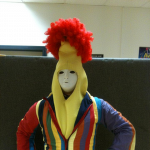 Hi, welcome to Arrowverse Wiki! Thanks for your edit to the Oliver Queen page.

Don't change their status based on speculation. You changed it based on everyone saying Oliver is dead but all we saw was him being thrown off a cliff. Doesn't mean he's dead but most likely dead hence "presumed deceased". I've seen your wikia edits and I think you should accumulate experience before editing the big stuff like statuses.Cloudtheavenger (talk) 09:53, January 2, 2015 (UTC)

Oliver was stabbed and thrown off a cliff, but technically we never saw him actually die, only begin to. For example, if we saw him splat on the ground, then he'd practically be confirmed as deceased. However, we saw no such thing and it stays how it is. —MakeShift (talk page) 10:04, January 2, 2015 (UTC)

As of yet, we don't have forums. However, in regards to your proposal, I'd say no purely for the fact that if we did it that way, it'd need to be implemented for every single person that's killed someone, and that's probably too great a number. The MCU Wiki is big because it's an entire universe, so something so large-scale might work, but we're not as big so it would not really. —MakeShift (talk page) 00:51, January 3, 2015 (UTC)

I know of nowhere around Wikia where users welcome sweeping re-writes of their material without consultation. You might want to consider this before you proceed. {{SUBST:User:Jiskran/Signature}} 11:46, July 25, 2016 (UTC)

Multiple edits to a single page

Hey, I've noticed lately you keep having multiple edits on a single page in one day (mainly your user page). Please try to do all of the editing you want to do in one edit. You can always check your changes using the "show changes" button. So you don't have to save every time to see your progress. Repeated edits take up a lot of space in the Recent changes. So please keep this in mind. Thanks, $ \int $ IHH dt    10:42, Apr 03, 2020 (UTC)

Retrieved from "https://arrow.fandom.com/wiki/User_talk:BananaClownMan?oldid=473222"
Community content is available under CC-BY-SA unless otherwise noted.