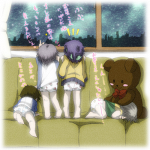 I understand you were the target of a personal attack, but this:

"'No. You're being the insufferable person. You sound and write like a teen."
—(You)[src]

...is only perpetuating the situation.

I don't normally have such childish discussions but all that person did was constantly call me stupid even if I was being rational and thinking maturely. Chinkycandie (talk) 10:41, October 10, 2017 (UTC)

Generally speaking, we use screenshots over promo still. Also, try naming images with a descriptive name. It's possible someone will overwrite the image with a completely different image since it's a generic name while that image is used for a specific section of a biography which would mess it up.TIMESHADE |Talk/Wall| - |C| 07:08, November 1, 2017 (UTC)

It's been brought up before. However, such a scenario would just leave more pages to moderate and more places to vandalize. And it gets subjective what goes in the subpage and what goes on the main page.TIMESHADE |Talk/Wall| - |C| 09:10, November 6, 2017 (UTC)

Our wiki has a far larger user base, so it means more people edit and we have to moderate them to make sure they're up to standards, which ours needs to be high due to high viewer base. If anything, a way to solve the long page issue is what OuaT wiki does with expandable/collapseable sections.TIMESHADE |Talk/Wall| - |C| 00:13, November 8, 2017 (UTC)

Hey, thanks! Well, I started out as a user at this community, at the suggestion of User:Тостер, so I often read and comment on the blogs and threads. Plus, I kinda had to do this, due to my content mod duties, and if you have to read it, might as well say something, eh? --Kir the Wizard (talk) 13:50, November 7, 2017 (UTC)

The guest stars in the infobox should only be those listed as such in the opening credits (and occasionally the one or two in the closing). Any others that aren't should be removed. As for on the season pages, that's free reign, cause Jack Moore is technically recurring. —MakeShift (talk page) 02:04, November 18, 2017 (UTC)

Just like to point you to our spoiler policy. Because the costumes have only been on promotional material thus far, it's considered a spoiler as it has yet to appear in an aired episode. Feel free to add them back once we see the suits in an episode though.TIMESHADE |Talk/Wall| - |C| 03:39, January 10, 2018 (UTC)

Sounds great! But probably should only use it for people who successfully used it, as Ray failed to use the water totem.TIMESHADE |Talk/Wall| - |C| 06:54, April 6, 2018 (UTC)

Just So You Know

I was editing from the mobile version of the wiki while I was updating Season 4 as the news started to roll in. Take youre attitude somewhere else if youre gonna try and disrespect me.AtomicBombshell29 (talk)

Please keep infoboxes in the order they're listed on their template pages, not some jumbled up mess. We like to keep it that way as it makes things easier to edit across the board, so having the variables in some random order just confuses matters. —MakeShift (talk page) 13:30, January 22, 2019 (UTC)

On series regulars: I'll add them to the Portal when they are actually listed in the credits (we've had announcements that Matt Ryan would be in the main cast, but he was only credited as special appearance by, at least so far). On other points: that can be added in respective articles by anyone.--Kir the Wizard (talk) 20:54, March 18, 2019 (UTC)

Just a heads up, while I know you were removing references on the "Fadeout" page as most weren't needed anymore, but a few of them that referenced things not covered in the episode should still keep the citation, like Amell and Ramsey getting their respective endings. —MakeShift (talk page) 04:58, January 29, 2020 (UTC)

Retrieved from "https://arrow.fandom.com/wiki/User_talk:Chinkycandie?oldid=623726"
Community content is available under CC-BY-SA unless otherwise noted.