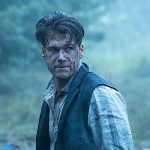 Please stop calling him Black Flash. While producers referred to him as that, it doesn't mean he's currently named that. It took Oliver 4 seasons to be Green Arrow, it took a few episodes for Barry to be called The Flash, the Legion weren't self named that, they were later nicknamed that. So producer words aren't always relevant at the time being.TIMESHADE |Talk/Wall| - |C| 20:43, March 7, 2017 (UTC)

The producers just said we won't find out this season. Doesn't mean you assume it'll be the next. Also, you have to SOURCE your content to back up your info. You can't just put info down without references just like you have to cite all content on your papers you would do in school.TIMESHADE |Talk/Wall| - |C| 19:15, March 8, 2017 (UTC)

Retrieved from "https://arrow.fandom.com/wiki/User_talk:DrPieguy81?oldid=248002"
Community content is available under CC-BY-SA unless otherwise noted.