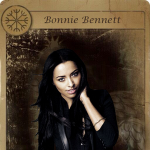 Hi, welcome to Arrowverse Wiki! Thanks for your edit to the Evelyn Sharp page.

Due to our spoiler policy, we don't add in-universe content until it's established in an aired episode. So far, no aired episode has revealed the name of Caitlin's mother. Though we know from news information, we still have to wait for it to be known on the show.TIMESHADE |Talk/Wall| - |C| 03:58, September 14, 2016 (UTC)

Please stop removing links just because they're red. If the links don't have pages yet, then that means they need to be created, not that they need to be removed. If you keep doing it, it'll likely be considered vandalism and/or editing for the sake of editing. —MakeShift (talk page) 05:00, December 2, 2016 (UTC)

No to be sarcastic about this matter and it's not a assumption it's just simple math of fitting it into the timeline FanMade Girl 20 (talk) 04:19, December 3, 2016 (UTC)

You are entirely just assuming she was born in that year, she could've been born a year later or in the early 90s. Don't make assumptions when editing. If Stein later says "She was born later that year" then make the edit that places her birth year at 1988 or whatever, till then don't make assumptions. Kaestal (talk) 15:23, December 3, 2016 (UTC)

Retrieved from "https://arrow.fandom.com/wiki/User_talk:FanMade_Girl_20?oldid=198375"
Community content is available under CC-BY-SA unless otherwise noted.