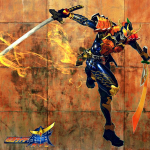 Hi, welcome to Arrowverse Wiki! Thanks for your edit to the Unfinished Business page.

We're not idiots, don't think you're the only one here who know's anything about comics. If you're so smart, you'd know to check the wiki's policies first. So far we can only list him as Ronnie Raymond/Firestorm on Robbie Amell's page, which we do. These stuff only belong on production pages for now. On character pages we stick to as much as we know on the show not outside sources/comics.TIMESHADE |Talk/Wall| - |C| 05:39, October 17, 2014 (UTC)
Also, if you continue to act like a smart ass, TimeShade, MakeShift or myself will either block you for a week, or make it so that you can only edit your profile. Wraiyf You never know when life will hit you hard, but then you hit it back. 12:45, October 17, 2014 (UTC)
Alright. Thats fair. I just didn't know then. skywarior60740 (talk)

Yes, Eddie shares a similar name to him, but we don't know for sure whether he's actually Eobard, so it's best for now not to assume. Though I have included a bit about how his name is extremely similar, as that's really all we can note. —MakeShift (talk page) 09:23, October 19, 2014 (UTC)

Don't make a disamig page as Laurel has yet to be called it and she will be called Black Canary, not the Canary. Also look at how disambig pages are done.TIMESHADE |Talk/Wall| - |C| 20:18, November 27, 2014 (UTC)

Just because the shows crossed over, on episode pages we use the previous or next episode of the respective show, not the crossover. After all, they didn't lead in to each other, they just both had both heroes. —MakeShift (talk page) 06:43, December 7, 2014 (UTC)

Hello, Jonathan Leung, I'm TimeShade, one of three admins on this wiki. We have a few policies and guidelines that you should take note of. They are fairly simple policies, if you have any questions, feel free to leave a message on my talk page.TIMESHADE |Talk/Wall| - |C|

Retrieved from "https://arrow.fandom.com/wiki/User_talk:Jonathan_Leung?oldid=386180"
Community content is available under CC-BY-SA unless otherwise noted.