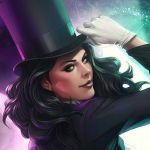 Hello, just like you to know that if you are uploading images for use outside the mainspace, they should be named as "User-Jourdon-X" or "UserBlog-Jourdon-X".TIMESHADE |Talk/Wall| - |C| 04:36, January 28, 2018 (UTC)

We having a chat party at lab rats elite force wiki with you want come.

Yes I remember that episode but if that's the case then why did Samantha have normal Kryptonian powers after she was separated if she was supposedly had human DNA? She got powers and used them to help Supergirl face Reign after the separation. She wasm't Reign when she had the powers. Jourdon (talk) 00:23, September 19, 2019 (UTC)Jourdon

I feel like it's an alien mutation in the same style as Livewire. She gets it accidentally from an altercation with Malefic. It's not like Manchester Black where it was intentional and done with a technique. So yeah, classify it as an alien mutation. Her powers are linked with Malefic and finding him. Not exactly a meta thing and more a mutation thing.

I'd say just keep it as it is. They haven't mentioned anything on Kelly's physiology changing from this event so she still works well being human.

Hey, be sure when you add pages that you name them correctly and only add pages that have been confirmed. For example, you added "Mexico City (Earth-38)". But we have no city known in any other earth called Mexico City. So the page only needs to be "Mexico City". There has been a lot of newly created pages like this recently. I don't know if it was you, but if it is please be aware of this. There is no reason we need to call it "Mexico City (Earth-38)". As well, please do not add phantom headers if you are not going to include anything underneath it. In the very least, be sure to add the {{Section stub}} template to those sections. In general, if you are basically only creating the page and adding no content, add the {{Stub}} template to the top of the page. As well, since there is no other versions of Mexico City in the multiverse, there is no reason to add the {{Doppelplace}} template to the page. Hope this helps, $ \int $ IHH dt    2:57, Feb 18, 2020 (UTC)

Currently we do not have such a category, hence why the category page did not exist. And they have actually oposed a creation of such a category in the past.https://arrow.fandom.com/wiki/Talk:Arrowverse_Wiki#Creating_a_former_villains_category_page.Ninja72 (talk) 16:21, November 14, 2019 (UTC)

I think you misunderstood what she said, that's like saying Flashpoint was another Earth although, it was just a different timeline on the same friggin Earth. --Jourdon (talk) 03:20, December 9, 2019 (UTC)

There is a bit of a difference betwen Henry/Barry and Ray/Clark. Henry and Barry both have Allen heirtage, so you could say that the Allen family on Earth-90 skipped a name in the generations and that is why their version of Henry Allen is named Barry Allen. Clark and Ray do not have the same family heirtage and are not even the same species. This is why I think Clark and Ray should not be listed there.Ninja72 (talk) 21:04, December 10, 2019 (UTC)

That AI iat least imo should not be counted as a doppelganger, just because it had the same voice and the same first name as Snart. It could have been programmed to have that Earth s Leonard Snart s voice and named after him for all we know. As for characters, who have the same name, but look different, we consider them a separate concept that is referred to as Multiverse counterpart on the wiki. Doppelgangers as we currently have it defined are alternate versions of people, who look the same.Ninja72 (talk) 21:15, December 10, 2019 (UTC)

RE: Species of new characters

Apologies for the time to reply, I've been a bit caught up lately. As we've done in the past, it's still just worth leaving the species blank unless otherwise stated, or at least implied. Like if a character's parents are both human, it's a safe bet that they're likely human too (even though they could be a number of other things; it is simply safe to make the assumption). —MakeShift (talk page) 05:24, January 20, 2020 (UTC)

Retrieved from "https://arrow.fandom.com/wiki/User_talk:Jourdon?oldid=614263"
Community content is available under CC-BY-SA unless otherwise noted.