For other uses of "Vixen", see Vixen (disambiguation).

Vixen is an animated web series that premiered on CW Seed on August 25, 2015. It is set in the same universe as both Arrow and The Flash.[1] The first season spans six parts, as a sort of origin story for Vixen.

Having always had the potential to make a live-action appearance on Arrow or The Flash,[2] it was announced in December 2015 that Megalyn Echikunwoke, the voice actress of Mari McCabe, would reprise her role in the fifteenth episode of the fourth season of Arrow, "Taken", marking the character's first live-action appearance in the universe.[3]

The first and second seasons were combined to form a full-length feature film, titled Vixen: The Movie and was released on May 23, 2017.[7][8] This makes it the first film set in the Arrowverse before The Flash was retconned into the Arrowverse.

Originally from Africa, Mari McCabe's parents were killed by local greed, corruption, and wanton violence. But the orphaned Mari refuses to succumb to the terrors surrounding her. Inheriting her family's Tantu Totem, Mari can access the powers of animals-anything from the super-strength of a gorilla to the speed of a cheetah. As Vixen, she fights valiantly to protect the world from threats like those that claimed her family. This six-episode series debuting on CW Seed this fall, featuring the voices of Stephen Amell (Arrow), Grant Gustin (The Flash), Emily Bett Rickards (Arrow), and Carlos Valdes (The Flash). It follows Mari's path as she first learns to embrace her incredible abilities and discovers the source of the mysterious Tantu Totem's power.[9]

Marc Guggenheim has definitively stated that the first season takes place circa Arrow's "The Offer".[4][5] Based on contextual clues, the second season takes place somewhere between Arrow's "Lost Souls" and The Flash's "Running to Stand Still" as Ray Palmer is no longer presumed dead (found alive in Arrow's "Lost Souls"), Jefferson Jackson is now Firestorm (The Flash's "The Fury of Firestorm"), Mark Mardon is not in Iron Heights (he was arrested in The Flash's "Running to Stand Still"), and the Legends have not yet been recruited by Rip Hunter. Furthermore, Vixen: The Movie indicates that a year has passed since the events of the first season and Oliver Queen is currently running for mayor of Star City, as seen in Arrow season four.

The events of both seasons are referenced later, confirming their timeline placement. In Arrow's "Taken", Oliver mentions an "animated encounter" with Mari, while Laurel Lance recognizes her (the two having first met in Vixen's second season). In DC's Legends of Tomorrow's "Land of the Lost", Ray Palmer makes reference to Mari as the granddaughter of Amaya Jiwe, and that he met her previously (again, in Vixen's second season).

Due to the actions of the Legends in "Guest Starring John Noble", Zambesi Village was never destroyed. As a result, Mari and Kuasa were raised by their biological parents, thus erasing the events of this series from the timeline. 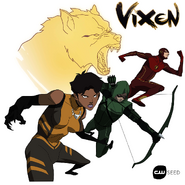 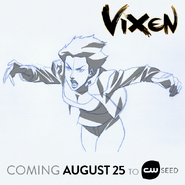 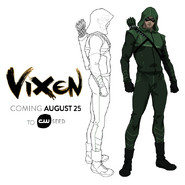 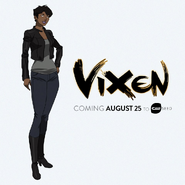 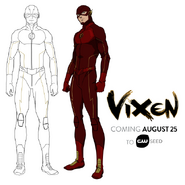 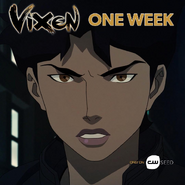 Retrieved from "https://arrow.fandom.com/wiki/Vixen?oldid=559830"
Community content is available under CC-BY-SA unless otherwise noted.