Allows the user to harness the power of water
The Water Totem is a mystical object that allows the user to harness the power of water. It was once owned by Kuasa. It is one of a total of six mystical Zambesi totems created by Anansi presented to the great tribes.[1] It was destroyed but when Kuasa was resurrected, her being was merged with the totem, giving her access to its powers independently. Harnessing the power of Mallus, Nora Darhk managed to remove the Water Totem from Kuasa's body, killing the latter in the process. Once the Legends defeated Mallus, the Water Totem was given to Kuasa from the new timeline to protect.

After the people of Zambesi faced numerous attacks from their neighbors and nature, they prayed for protection. Their prayers were answered as the six[2] great tribes were each presented a mystical totem harnessing a power of each elemental forces. A tribe was presented the Water Totem, the totem with the power of water.[1]

The totem eventually found its way into the hands of a collector in Star City. Mari McCabe and Kuasa sought to steal it from them, but Kuasa stole it first, fighting Mari with the Totem. However, she was soon overpowered by Mari's friends and convinced to use it against Benatu Eshu.[3] She did so, attempting to combat his fire with her water. However, she was overpowered and ultimately killed, along with the totem's physical form being completely destroyed.[4]

Later on, it was mentioned that when destroyed, the totem merged with Kuasa, giving her the same powers as the totem without the need for it.[5]

After Kuasa betrayed the Darhks and helped the Legends, reclaiming the Anansi Totem from Nora and returning it to Amaya, Nora used her magic to draw the Water Totem's powers out of Kuasa, causing it to re-form, killing Kuasa in the process.[6]

Ironically, Damien Darhk, in betraying Mallus to save his daughter's life, would give the Legends the totem that would end up being assigned to Ray Palmer to battle against the demon. However, after the first failed attempt to stop Mallus, Ray ended up taking Damien back in time so he could take Nora's place as Mallus' vessel, while the water totem was instead assigned to Wally West who used it with the other Legends wielding the Totems of Zambesi to create a giant Beebo to destroy Mallus once and for all.[7] 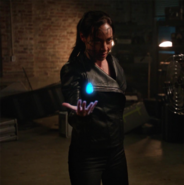 Retrieved from "https://arrow.fandom.com/wiki/Water_Totem?oldid=563886"
Community content is available under CC-BY-SA unless otherwise noted.