The Flash suit, known as the XS suit in an erased future, is a protective suit that Iris West-Allen wore as the temporary meta-human known as the Flash and that later would be adopted by her daughter Nora West-Allen.

After Matthew Kim transferred Barry Allen's DNA to Iris's body, she gained Barry's powers. When there was a fire in Central City, Cisco gave her a spare mask belonging to Jesse Wells in order to conceal Iris' identity.

In the future, Nora West-Allen will eventually don the suit, the suit had a XS insignia, she used the suit when assisting her father in destroying a satellite and later as normal apparel.

Unlike Iris's version of the suit, this version has the symbols Barry wrote after his time in the Speed Force as a pattern on the suit.

Nora West-Allen's XS suit.
Add a photo to this gallery

The Flash suit
Add a photo to this gallery 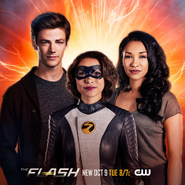 "Fast, Present and Future".
Add a photo to this gallery

Retrieved from "https://arrow.fandom.com/wiki/XS_suit?oldid=686780"
Community content is available under CC-BY-SA unless otherwise noted.